What a tangled web we weave-some thoughts on a proposed Child visa application. 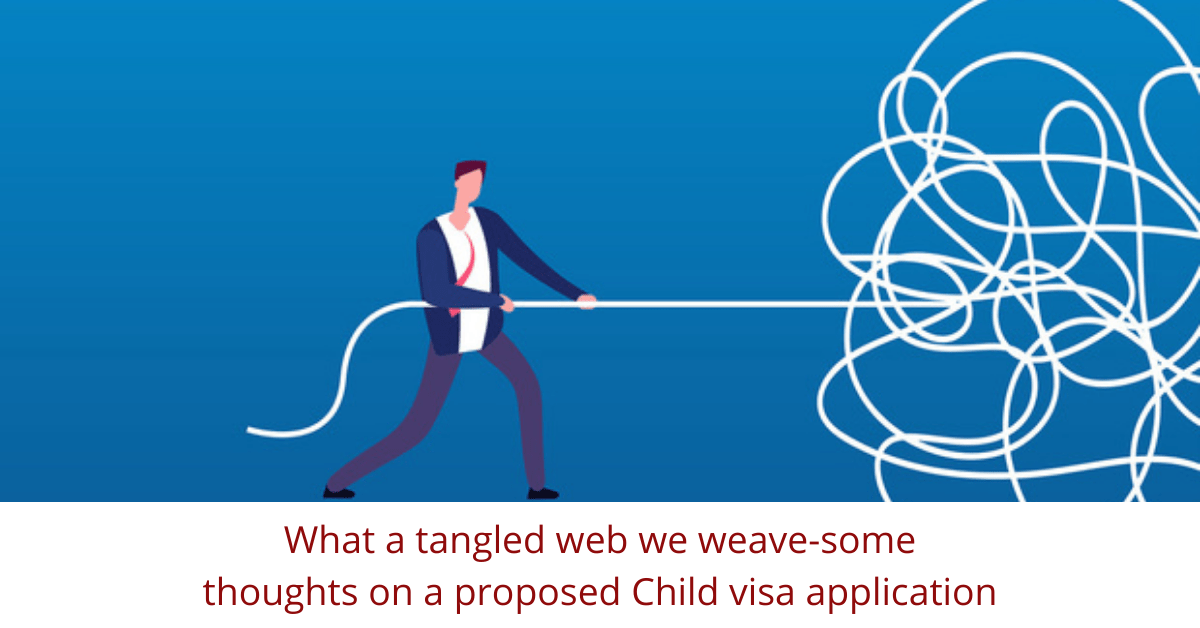 An enquiry, on behalf of a “friend” was received recently.

The facts of the case are as follows:

Mr A was born and raised overseas. He married and he and his wife (B) had three children. Mr A then came to Australia and, in due course, obtained permanent residence. He travelled back to his country of origin on a number of occasions and maintained his marriage with B.

Mr A became an Australian citizen and remained living in Australia. After some years, Mr A  entered into a relationship with a lady in Australia and eventually married wife (C). C is a permanent resident of Australia and Mr A and C have two children in Australia. Mr A has never divorced B and continues to support her and their children.

Mr A would like to bring his children from his marriage with B to Australia and wishes to apply for a subclass 101 visa for his children to enter Australia. It would seem that Mr A is likely to encounter a number of problems.

The first problem is that Mr A is guilty of the crime of Bigamy (entering into a “marriage” with a person while still validly married to another person.) Section 94 of the Marriages Act 1961 (Cth) makes it a criminal offence to marry someone while you are in an existing, legally recognized marriage.

The marriage Mr A entered into overseas with B is recognized as a valid marriage under the Migration Act 1958.

The second problem is that Mr A has, either on his original visa application or in the documents connected to his marriage to C, made a false and misleading statement, either by not disclosing the fact that he was married with children in his visa application or by stating in the marriage documents or on the Marriage certificate that, at the time he was marrying C, he was “never in a valid marriage.”

In either case, Mr A is going to face having his original visa cancelled under the provisions of s101 (giving incorrect answers or information) and s103 (produce a false or bogus document) as read with sections 108 and 109 of the Migration Act 1958.

In the above circumstances, Mr A is well-advised that any attempt to bring his children from wife B to Australia is likely to lead to very severe consequences for him.

Australian Immigration law is complex and complicated. It is always a good decision to get professional advice from a qualified Legal Practitioner or Registered Migration Agent.

They may be able to find a way out of what seems to be a hopeless situation because of their up to date knowledge of relevant law.

We have a dedicated, professional team at Red Earth Migration who are committed to giving you the best and most cost-efficient advice and assistance to help you find your way through an often difficult and confusing legal process.